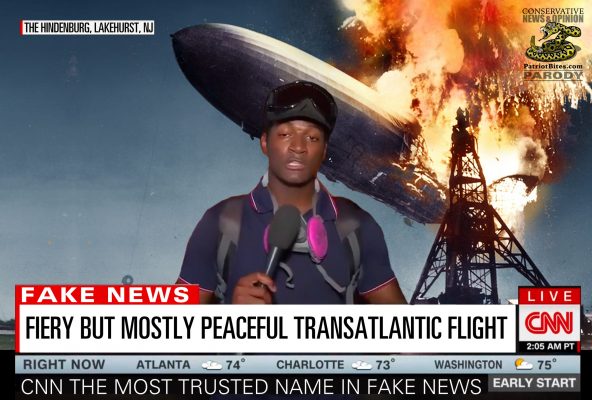 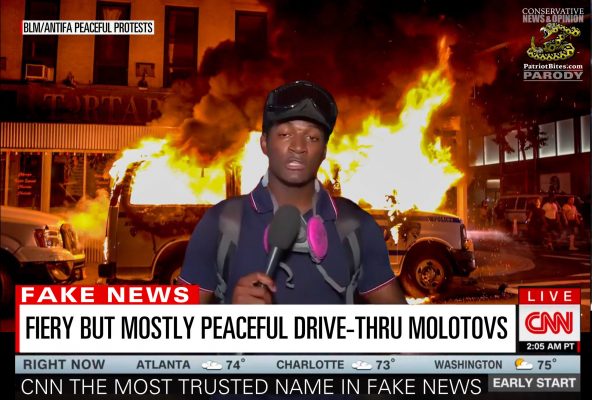 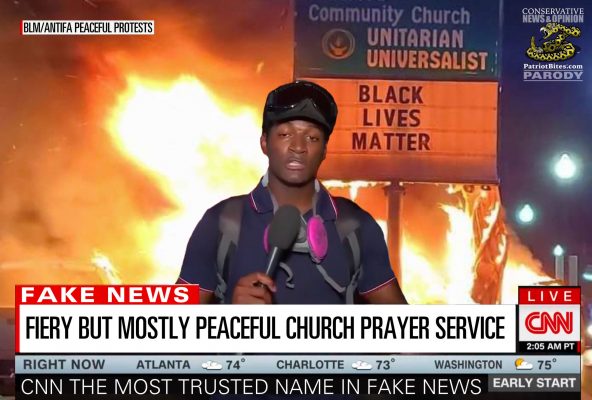 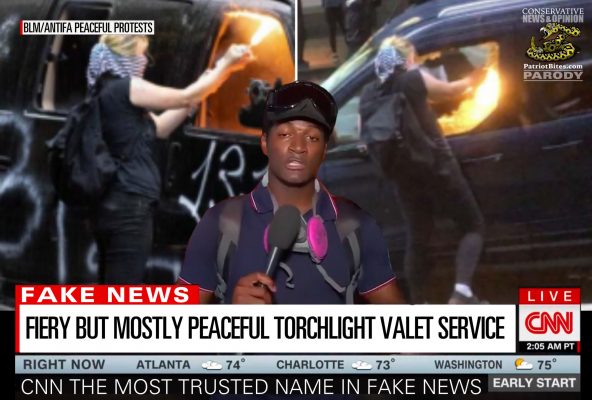 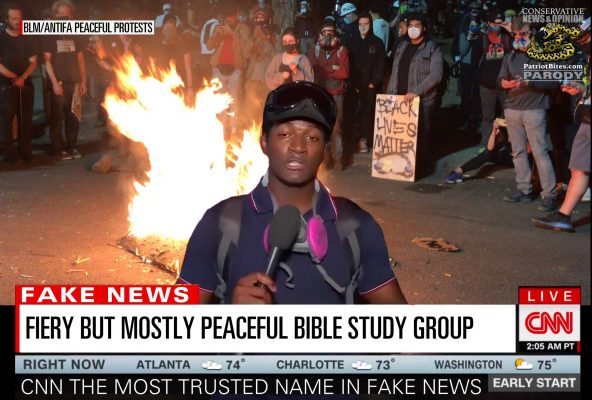 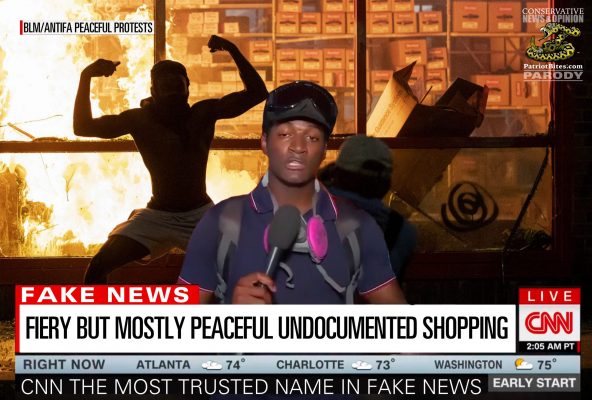 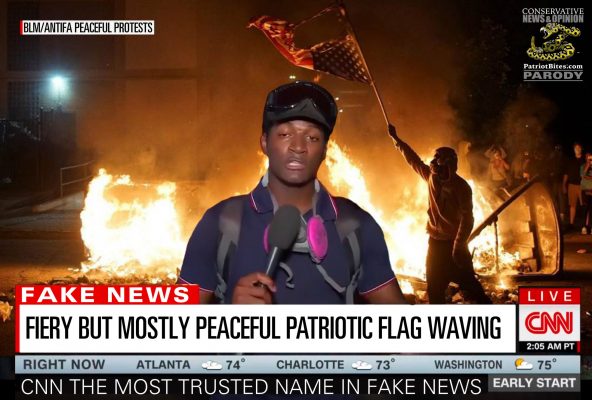 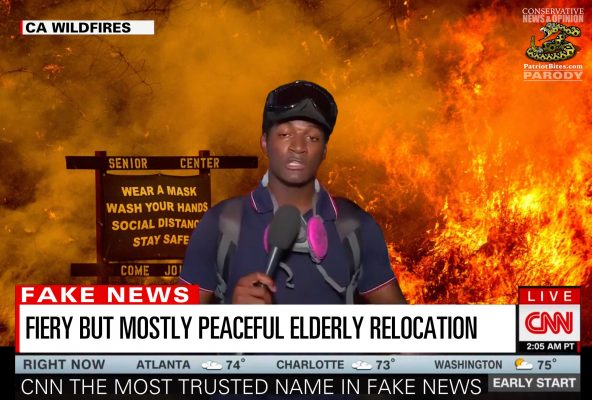 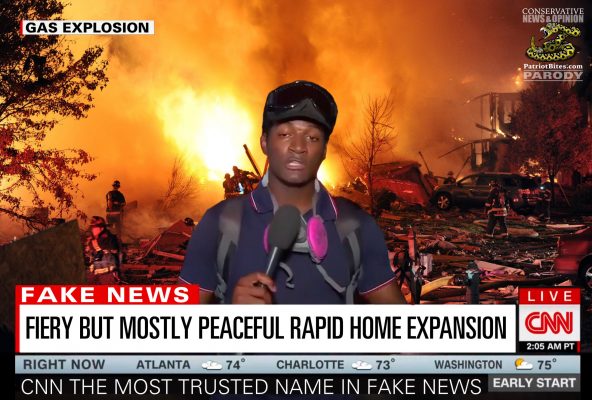 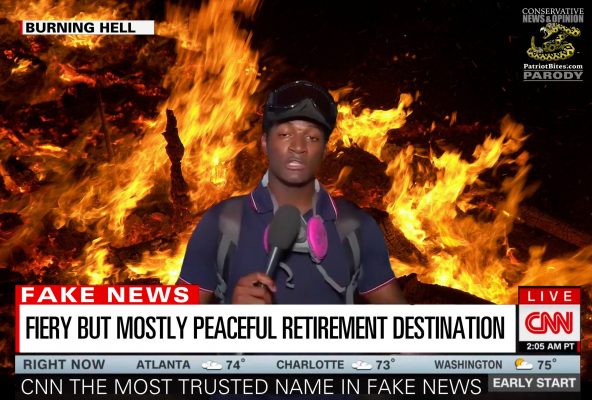 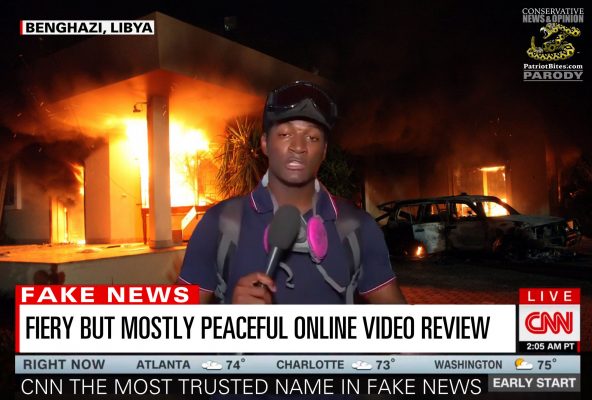 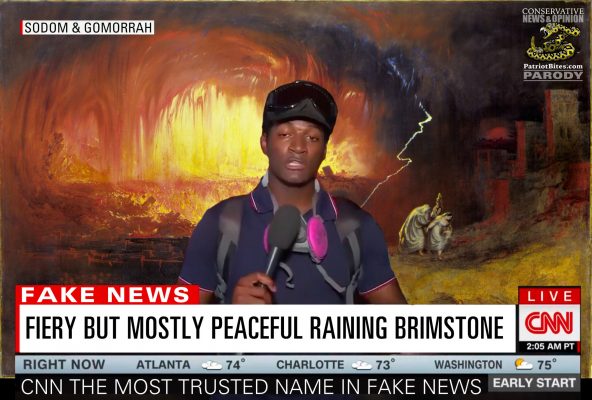 CNN took their place in the pantheon of Fake News Media today with their well deserved Fake News Media Award! They won the Grand Con Award with their new BLM/ANTIFA chyron series that left their competition in the ashes. Most run of the mill Fake News Media had reported the BLM/ANTIFA riots with the standard “Peaceful Protests” moniker. Unfortunately the public began to find leaked online videos of what was really going on in these often violent riots. They saw marauding marxist mobs burning and pillaging their way through many Democrat run cities. So the more progressive Fake News Media organizations upped their game with the newer “Mostly Peaceful Protests” moniker.

But it soon became clear that the public was starting to realize that they were being duped by the Fake News Media. They were seeing more and more leaked online videos of many businesses being looted and burned to the ground in many of these “Mostly Peaceful Protests.” So in a blinding flash of brilliance, CNN unveiled their new award-winning chyron: “Fiery But Mostly Peaceful.” It takes a real devious genius to call arson, “Fiery but mostly peaceful.” This new chyron turned out to be so useful that they were able to use it to cover and obfuscate every angle of the BLM/ANTIFA riots as a robust shield to hide the truth. Here are a few of the many uses of the new chyron in action.

CNN Has Turned Itself Into America’s “Baghdad Bob”

Authored by Andrea Widburg via AmericanThinker.com,

On Tuesday, with its reporter standing in front of a raging fire, CNN ran a ludicrous chyron stating, “fiery but mostly peaceful protests after police shooting.”

Ordinarily, this wouldn’t be worthy of reporting three days later.

However, for some reason, this chyron was a bridge too far for many people, and the internet is still flooded with memes. It’s apparent that, with this latest denial of objective reality, CNN has finally completed its transformation into Muhammad Saeed al-Sahhaf, whom many Americans remember almost fondly as Baghdad Bob, the Hussein regime propagandist who insisted that Saddam was winning even as U.S. troops entered Baghdad.

In 2003, when our military successfully invaded Iraq and quickly captured Baghdad, Muhammad Saeed al-Sahhafk, aka Baghdad Bob, was Saddam Hussein’s Minister of Information. As troops neared and then entered Baghdad, al-Sahhaf gave daily press briefings during which he announced the most outrageous lies about the wars.

For example, Baghdad Bob insisted that American troops were committing suicide “by the hundreds” and that none had entered Baghdad. Meanwhile, Americans were a few hundred yards away from him, and the audience could hear the sounds of their fighting. On April 8, four days before Americans captured Baghdad, al-Sahhaf was still insisting that U.S. troops “are going to surrender or be burned in their tanks. They will surrender. It is they who will surrender.”

Read the full story by Andrea Widburg via AmericanThinker.com,

Yes, Good ol’ Baghdad Bob! I still remember watching him deny that Americans had entered Baghdad only to see American tanks and soldiers taking the royal palace in a split screen. So if anyone misses such laughable lies all we need to do is tune into CNN for any of their BLM/ANTIFA “Fiery But Mostly Peaceful Protests” reports on the TV and then look online for the truth. You can then play the online clips while also watching CNN on TV. It’s just like watching good ol’ Baghdad Bob lie through his teeth, while seeing the truth in the split screen. Baghdad Bob probably didn’t know we could see the truth from another camera. That’s understandable. But doesn’t CNN know we can look things up on the Internet (or on FoxNews or OAN?) to see what’s really going on? LOL! 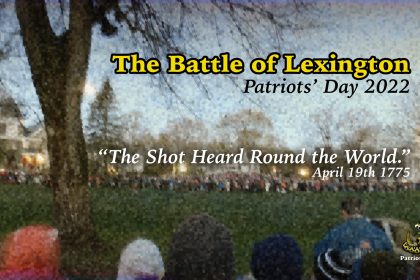 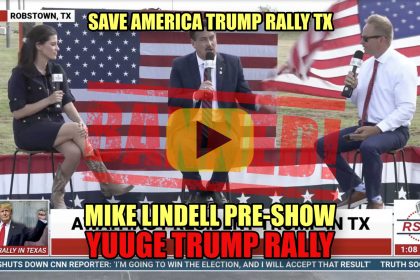