MARICOPA COUNTY, AZ 9/8/21 — In the above video Liz Harris announced the explosive results of her citizens group’s Election 2020 Grassroots Canvass Report and Seth Keshel provides his analysis of Maricopa County, AZ. She discusses the results with Steve Bannon on Bannon’s War Room Ep. 1,243. They’ve been canvassing statewide in AZ since December. Now they have the earth shattering results.

34% of those interviewed by the canvassers said they voted, but there was no record of their votes being counted. The number of lost votes in Maricopa County were estimated at over 173K.

There were also over 96K estimated mail-in ghost votes. Ghost votes are described as votes cast “under the names of registered voters who were either unknown to the residents of the registration address or who were verified as having moved away prior to October 2020.”

This is a completely separate canvass report by a citizen’s grassroots group than the highly anticipated Maricopa County, AZ forensic audit report underway, which should drop any day now. The calls to decertify the 2020 results in AZ are already growing. Once the official Maricopa County Forensic Audit Report drops the pressure to decertify the AZ election results will become overwhelming.

An estimated 173,104 votes are missing or lost, as reported to our volunteers who went door to door verifying registration and voting information for thousands of residents. These are American citizens living in Maricopa County who cast a vote, primarily by mail, in the election and yet there is no record of their vote with the county and it was not counted in the reported vote totals for the election. Additionally an estimated 96,389 mail-in votes were cast under the names of registered voters who were either unknown to the residents of the registration address or who were verified as having moved away prior to October 2020. Other irregularities were uncovered during the canvass at a smaller scale, including votes cast by mail from vacant lots, votes recorded from residents who had not actually voted, etc.

These results are a travesty to our democracy and our voting rights. In addition to impacted local races, such as Maricopa County Board of Supervisors District 1, decided by 403 votes, key statewide race margins are well within the numbers shown above. The Presidential race was decided by 10,457 votes statewide, and the U.S. Senate election was decided by 78,886 votes statewide.

To download a PDF copy of the full report please take 30 seconds to click the Canvass50 link below and answer a few simple Canvass50 questions. Answering these simple questions on the electronic nationwide canvass will help canvassers in your county. Then you will be directed to the PDF download.


Next Step DECERTIFY AZ and Other Dominoes Will Fall

The fallout from this bombshell canvass report was swift and sharp.

It is quickly becoming clear to many who are waking up from the mass propaganda media brainwashing, #TrumpWON!

“Nothing says 81 million votes like spontaneous ‘F you‘ chants breaking out in stadiums across the country.”

Biden’s DOJ is not concerned at all about investigating the mountain of apparent election fraud evidence nationwide, but they were panicked to stop any attempt at canvassing to expose that potential fraud. What does the left do when panicked about losing on the merit? Why they play the race card and try intimidation to shut down any investigation or discussion about the merits. 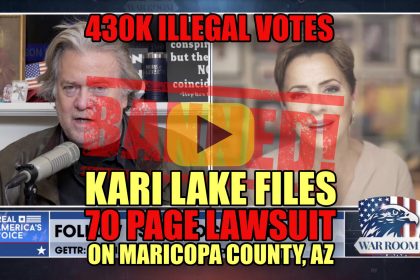