UPDATE 2/15/22 — In the above video, Rep. Louie Gohmert joins Natalie Harp of One America News to discuss the details of the Durham revelations.

”These people need to be indicted. They need to be prosecuted. And, when it comes to Hillary Clinton, the things she was saying, and what she was saying, sure do make it sound like she is a principal in the conspiracy against Donald Trump, and against President Trump. And, that would get you to a Constitutional basis for Treason.”

In the above video, One America’s Dan Ball and Chanel Rion discuss the impact of Durham’s latests bombshell and the depth of corruption in the Biden regime as well as Hillary Clinton, the FBI and the CIA.

Kash Patel — “None of us thought it could get this bad”

2/14/22 — In the above video, Kash Patel Drops BOMBS about Durham Investigation and Grand Jury on NewsMax’s Greg Kelly.

“None of us thought it could get this bad. A private entity on behalf of a political opponent, Hillary Clinton, paid for access to the entire White House compound to infiltrate the servers of not just the Office of the President, the National Security Council, the National Economic Council, the Trade Council and the Office of the Vice President of the United States.”

Jim Jordan — “It was worse than we thought! This is Truly Unprecedented! We’ll See Where it all Shakes Out.”

Pete Santilli — Durham Report “Tip Of The Iceberg” Of Corruption

TheConservativeTreehouse.com does a deep dive into the vast iceberg beneath the surface of the Durham investigation.

“Barack Obama and Eric Holder did not create a weaponized DOJ and FBI; instead, what they did was take the preexisting system and retool it, so the weapons only targeted one side of the political continuum.”

What does the Durham Indictment mean? John Solomon with Sebastian Gorka on AMERICA First

Don Jr. — Trump Was Right About EVERYTHING!

2/13/22 — In the above video Donald Trump Jr. discusses the latest revelations from John Durham. Since Bill Barr appointed John Durham, Barr has apparently been compromised. However, John Durham appears to still be digging for the truth in the phony #Russiagate witch hunt. Earlier released documents showed that Russiagate was concocted by the Hillary Campaign in order to distract and coverup for her illegal email server scandal. Now, recently released Durham filings show that the Hillary Clinton Campaign allegedly paid for operatives to spy on the sitting President of the United States of America. This is the biggest political scandal since Watergate, leading up to and surpassed only by the 2020 stolen election coup.

Fox News Breaks it Down and Jim Jordan — “President Trump was Right.” “It was Worse than we Thought.”

Maria Bartaromo on Durham Revelations — “This is the Biggest Scandal we have Ever Seen.”

Ric Grenell on Durham’s Deep State Revelations — “I Believe, there is No Possible Way that You can be Spying and Monitoring Computers at the White House, Unless You have the Help of the US Government”

Matt Whitaker — “It is Beyond Outrageous What Happened Here.”

President Trump was Right All Along “The Biggest Scandal was when they Spied on my Campaign.” “It’s Treason.”

“The latest pleading from Special Counsel Robert Durham provides indisputable evidence that my campaign and presidency were spied on by operatives paid by the Hillary Clinton Campaign in an effort to develop a completely fabricated connection to Russia. This is a scandal far greater in scope and magnitude than Watergate and those who were involved in and knew about this spying operation should be subject to criminal prosecution. In a stronger period of time in our country, this crime would have been punishable by death. In addition, reparations should be paid to those in our country who have been damaged by this.”

Devin Nunes on Durham Indictments — “The American People are Depending on Durham to Hold People Accountable. This is a Dark Chapter of American History that is Not Closed Yet. People Need to Pay the Price.” 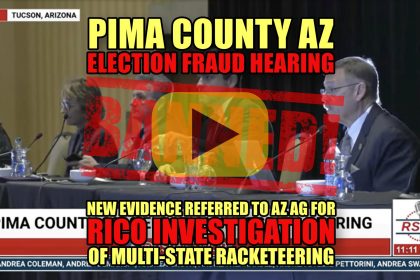