3/18/22 — In the above video, Dr. Frank and Jefferson Davis join Mike Lindell and Brannon Howse on FrankSpeech’s Brannon Howse Live to discuss the evidence that’s building pressure in Wisconsin to #DECERTIFY the fraudulent 2020 WI election. If the fraudulent election in WI falls, it will trigger the other battleground state dominoes to fall as well. The public pressure has been slowly building across the battlegrounds as citizen groups have been quietly canvasing their counties, mathematicians have been deeply analyzing the data, cyber security experts have been scouring forensic images of election machines, the Racine Sheriff referred the Wisconsin Election Commission for felony charges and justice Gableman continues his explosive investigation. This public pressure is now coming to bear on the linchpin that’s still holding the WI fraudulent election up by blocking Tim Ramthun’s Resolution to Reclaim the Electors, the speaker of the WI assembly, Robin Vos. Speaker Vos is still clinging to his crumbling stance that they cannot decertify the election. However, he had previously stated that there was not enough irregularities that would have affected the outcome of the election. He now readily admits that there was indeed “widespread fraud” in the 2020 election.

The linchpin is bending, as the pressure continues to build. Stay tuned.

In the above video Wisconsin Representative Timothy Ramthun joins Mike Lindell and Bannon Howse on The Lindell Report. They discuss how he was ejected from the closed door election meeting by Speaker Vos.

The above video gives an eyewitness view of the WI Election Integrity press conference.

In the above video Representative Tim Ramthun and attorney Dan Eastman obliterate the recent 60 minutes propaganda about the Wisconsin 2020 election.

Speaker Robin Vos, of the Great State of Wisconsin, just said there was “widespread fraud” in the 2020 Presidential Election, but that the State Legislature cannot do anything about it. Wrong! If you rob the diamonds from a jewelry store, if you get caught, you have to give the diamonds back, votes should be no different. There is already a very powerful resolution in the Wisconsin State Assembly that calls for the decertification of the 2020 Election and reclaiming of Wisconsin’s 10 electoral votes. There is so much fraud, as Vos knows, that this should be done quickly and easily. The highly respected Special Counsel, Michael Gableman, has exposed so much already, including election bribery with Mark Zuckerberg’s $8.8 million, horrific fraud stealing votes from the elderly in nursing homes, and rampant ballot harvesting and phantom votes. Far more votes than is needed for the Republican candidate, me, to win. Our Country would not be in the mess it’s in if Republicans had the courage to act. We would be energy independent, no inflation, the Ukraine desecration would not be happening, our economy would be strong, there would have been no surrender in Afghanistan, and so much else. Speaker Vos should do the right thing and correct the Crime of the Century—immediately! It is my opinion that other states will be doing this, Wisconsin should lead the way!

Once the first state decertifies the fraudulent election and blazes the path forward, others will follow suit. The decertification of the Arizona election is currently being held up by just one RINO state senator. If three states decertify, then Biden will OFFICIALLY be illegitimate, as he will have failed to get 270 legally certified electoral votes, and nothing else his regime proposes will have the political capital or support to pass. It will effectively shut down this rouge regime from further damaging the country. REAL election reform would also sweep the country to secure our Republic going forward. 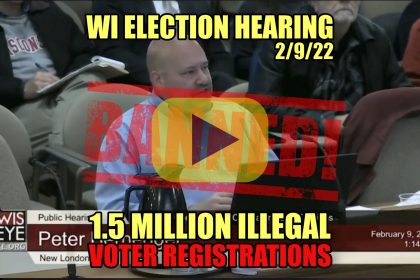